Put Your Pants On, Louisiana 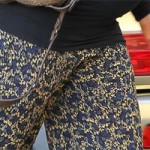 Caddo Parish in Louisiana is considering putting a ban on wearing pajama pants in public after a PJ-pant wearing patron had their junk fall out at Walmart in front of some old people.

Interestingly enough this wouldn’t be the first time that the Shreveport area has instituted a clothing related ordinance. More than 31 instances were reported after the 2011 “no-sagging” law went into effect. Police were rounding up citizens guilty of “wearing of pants below the waist in public.”

If the law should go into effect city officials expect that the punishment wouldn’t involve any jailtime but rather community service.

“Pajamas are designed to be worn in the bedroom at night,” Caddo Parish District 3 Commissioner Michael Williams said. “If you can’t (wear pajamas) at the Boardwalk or courthouse, why are you going to do it in a restaurant or in public? Today it’s pajamas, tomorrow it’s underwear. Where does it stop?”

On one hand that’s the same kind of over-extrapolated bullshit “logical progression” arguments you see all the time in politics and law. And those are always lame. But on the other hand how hard is it to just put on pants when you go outside? And chances are you’re gross looking and disgusting in general. So there’s that.